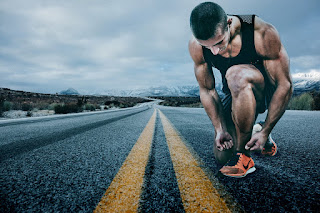 I like a sprinter in lycra as much as the next body-fascist. I'll happily spend an hour or two admiring muscular athletes of either sex spilling forth from their tiny costumes. When something looks this good, surely, it would be rude not to look?
But that is in the stadium, where to bare all, in the name of performance, is almost certainly necessary. Even if the lycra streamlining hood is not. Part of the sport's allure is admiring the peaks of human speed, endurance and strength alongside the rippling musculature.
But when I see female athletes strip for magazines, it brings me out in a hairy-armpitted fit of feminist fury. I'm sorry Victoria Pendleton, while I acknowledge your nifty ability with a bike and your tremendous arse, don't do it. Not for GQ magazine at least. I am most perturbed at the thought of all those pervy men in trendy suits and pointy brogues staring at her. Women in sport have a hard enough time being recognised for their talents as it is (will my dearest dear Paul Radcliffe ever live down the "pissing pitstop" moment?)
I know I know, we women have posters of Bradley Wiggins' incredible body adorned in a condom-like biking suit all over our walls. We drool over Wayne Rooney's delightful hairy legs (please note: irony). If only, if only, I could sink my teeth into (Sir) Chris Hoy's bulging thighs. Men are objectified too. But with men, it is a secondary thing. The lust is secondary to the nation's pride at their winning. And when ugly men do badly, we take them motheringly to our hearts. Look at Andy Murray.
But with women, it is everything. If you're not attractive, but successful, you are only begrudging admired and given little attention (see Sally Gunnell for details).
And if a beautiful woman loses - such as Sharapova - she's blamed for doing too many L'Oreal adverts instead of practising her backhand. Women should certainly boycott photoshoots of all but the most tracksuited kind until they are treated seriously by the sporting press, and the world in general.
But there may be a solution to all this hypocrisy and bum-gazing.
Despite my desire to be Usain Bolt's boxer shorts-wallah at the Olympic Games, I think, on reflection, I would support a Muslim-style "modest" Olympiad.
Let us filter out the distraction of the wobbling breast, the oscillating testicle, the raw naked-but-for-a-strip-of-peach-leotard crotch. Let us admire the sport for sports sake, be it by man or woman or neuter.
Stella McCartney could design something along the lines of a black jersey body suit with appropriately ruched sections for all. Especially for those bloody beach volley-ball porn stars. They should be bloody banned altogether until they get some clothes on.
Email Post

How Kids Change Your Taste in Everything

Walthamstow: the painful birth of a town transformed

Why 'Banged Up' is the wrong kind of tough love

Why having kids turned me into a DIY addict

Work No 1: All the Bellends

I gave birth to a human after all