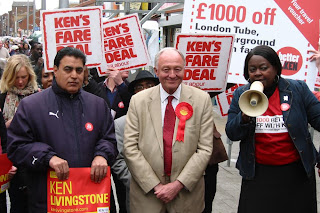 Ok, I'll admit it, I've gone off Ken Livingstone. Until now, I've been a lifetime supporter of his Royal Redness. At aged 14 I even played the role of Ken in a "balloon debate," arguing for his life to be preserved for the good of the country.  I can't remember if he ended up getting pushed overboard.
My socialist grandpa, a lifelong London resident, was a big supporter too and played a lead role in casting Ken as an uncle figure to us all.
I loved the free Rise festival in Finsbury Park, so miserably cancelled by Boris, just because it had the worthy and irrelevant "Anti-Racism" tag.
But his time has run out. First it was the baby with the younger woman - not a criminal act, but I'm always suspicious of 60-year-old men having kids. You know who you are.
Then there was the bizarre bus oil deal with Chavez. Do we really have to get involved with dictatorships to run the transport system? Is he really planning to get involved in Venezuela again?
Ken's done great things for the capital over the years. But three weeks ago I saw him campaigning on Walthamstow High Street looking as tanned as a chestnut and as smug as a man just returned from the tropics/tanning booth.
I don't really trust white men with deep tans. I'm not racist, but the tan and the toupe suggest a dodgy moral fibre and an unbecoming vanity.
I'm not terribly worried about Ken's tax affairs or his "gaffes" with Jewish journalists, but the picture of him putting out his rubbish in nothing but trousers and braces was the final straw.
I've warmed to Boris since his election. He watched me swim a length of breast stroke at the local swimming pool last year as he launched some sports initiative or another. I felt we connected over this, but was unsurprised to see that the Olympics would not mean the municipal leisure facilities would invest in functioning showers.
So, although Blondy Boz has melted my heart with his charming cable car project and Routemasters and disgraceful extra-marital affairs, he is yet to penetrate my rational mind. I simply can't vote for him.
On the high-profile men front, the only figure left is Brian Paddick. A nice manifesto but a more pathetically publicity seeking individual I am yet to encounter. He's been dining out on his old job with the Met Police for too long. He fell out of favour when I saw him "commentating" on the August riots for the BBC. It was about 5am, and there he was in the studio, lapping up his "policing expert" status.
He needs to do more than go on I'm a Celebrity Get Me Out of Here to get my vote.
So that leaves me with the independent Siobhan Benita. She says she doesn't want people to vote for her because she's a woman, but that's precisely why I will be voting for her. London's women deserve one of their own leading the way - not just on tedious "women's issues" (toilets on buses anyone?) but everything. Let's give her a chance. She can't do any worse than Boris.
Email Post

How Kids Change Your Taste in Everything

Walthamstow: the painful birth of a town transformed

Why 'Banged Up' is the wrong kind of tough love

Why having kids turned me into a DIY addict

Work No 1: All the Bellends

I gave birth to a human after all